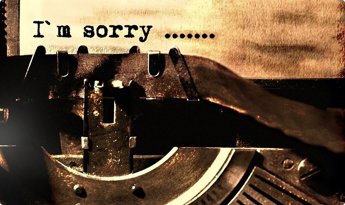 What is an Apology and What is the Apology Act?

Many people know that a simple, sincere apology, can avoid a lot of legal trouble.  Whether you might have caused a car accident, said something defamatory, broken a contract, or perhaps even committed a minor criminal offence, an expression of remorse can go a long way in avoiding a dispute and solving problems.  That is why the law in BC encourages people to apologize by ensuring that if they do apologize, it cannot be used against them as proof they did something wrong.  This BC law is called the Apology Act, and is a very short piece of legislation that very few British Columbians know about.

The Apology Act defines an apology as:

Legal Consequences of Making an Apology are Limited

The Apology Act states that an apology made by, or on behalf of a person, does not constitute an express or implied admission of fault or liability by that person.  Importantly, the law provides an apology cannot be taken into account by any court in determining whether a person is at fault for an event.  An apology cannot be used as evidence in court.  For example, if you are in a car accident, and you apologize to the other driver, the other driver cannot raise this apology in court as proof you think you might be at fault for the accident.

Some people believe that apologizing for an accident can void their insurance coverage.  Generally speaking, insurance policies require people not to prejudice the insurer’s ability to defend them, and if they do, the insurer can avoid providing coverage to that person.  The Apology Act however, provides that an apology cannot void insurance coverage.

I hope you have learned something from this blog.  Please feel free to like us on Facebook, follow us on Twitter and subscribe to our YouTube channel to receive notice of our future weekly video blogs on the law.  If you have a personal injury, estate dispute or marine law issue – contact us for a free consultation at 250-888-0002 or email us at info@leaguelaw.com.