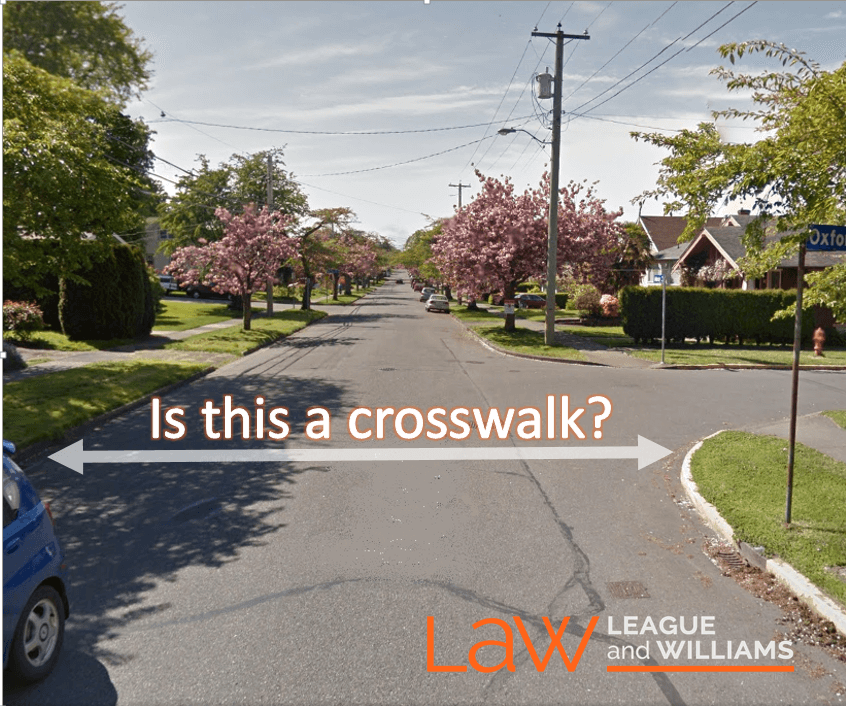 League and Williams Lawyers recently ran a contest on our Facebook page, asking whether or not the picture was of a crosswalk – with those who answered and liked our page being entered into a draw for a high-definition dash camera. 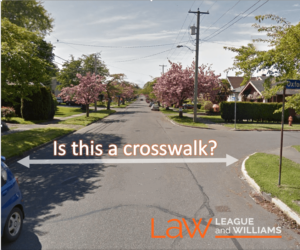 Is this a crosswalk?

There was passionate interest and response to our post.  Yes!  No!  What!?  Revealing a common misunderstanding about the BC Motor Vehicle Act (“MVA”) and how judges interpret it.

A large share of people would say “no”, this isn’t a crosswalk because there are no lines on the road or pedestrian signals.  On that basis alone, they would be incorrect – sorry.  The MVA provides that the rights of a pedestrian in a “crosswalk” includes an “unmarked crosswalk”.  An “unmarked crosswalk” is the portion of an intersection (including a T-intersection like in the photo) within the extension of the lines of sidewalks on one or more sides of an intersection; in other words, draw a line across the street from the end of the sidewalk.  So, even if there are no lines on the road (or lights), the area between the ends of the extensions of a sidewalk, even if unmarked, is a crosswalk!

But wait!  Maybe the “no’s” in this case aren’t wrong after all?!  The photo does not show that the sidewalk approaching from the right actually reaches the curb – the sidewalk stops at the intersection of the other crosswalk, leaving a grassy area between the end of the sidewalk and the road (a boulevard).  Importantly, one BC Court has said if such a grassy area was maintained by the local government and was meant to be walked on, then it doesn’t matter that the sidewalk didn’t actually join with the road – it was still an “improvement for pedestrians” (and therefore a sidewalk that ended in an unmarked crosswalk)!  The loser of that decision (the driver) appealed to BC’s highest court, which disagreed with the lower court and said, in that specific case, that because there was no sidewalk at all, and the city made no effort to maintain the boulevard, that the area was not “improved for pedestrians” and therefore not part of the “sidewalk” that met the road – the result was the injured child crossing the street was not in an unmarked crosswalk.  Basically, it boiled down to whether the city maintained the small area between the adjacent house and the street!

In the case of this picture, the court would likely find that “yes” this is an unmarked “crosswalk” because the grassy area between the sidewalk and the road is clearly improved (leveled, seeded and mowed), despite there being no extension of the sidewalk to the curb, a let-down, paint on the road, or other signals.

So what!?  If a pedestrian is crossing in an “unmarked crosswalk” (like this one) from the side of the street your car is approaching on, then they have the right of way, unless they step into the street in a manner that gives you no practicable means of stopping.  In other words, pedestrians cannot rely on an unmarked crosswalk to surprise drivers.  That said, the law requires drivers approach all intersections, especially intersections like this one in a residential area where children and other pedestrians are common, in a cautious manner (i.e. expecting someone might step out).

Sadly, some drivers approach pedestrians in unmarked crosswalks aggressively and challenge them for “jay-walking”, when they in fact have the right of way.  Don’t be that driver.  Approach every intersection with caution and humility, knowing your car can kill.

Thank you for caring about this issue.  Please answer our future road safety quizzes and share them with friends to help save lives (and insurance premiums).

Because of the difficulty of this question, everyone who liked our page (not just commented) was entered to win…. and the winner is… Joe Battler!  Congratulations Joe!

If you have a question about this topic or another legal issue, contact us for a legal consultation.  Reach us at 250-888-0002, or via email at info@leaguelaw.com.