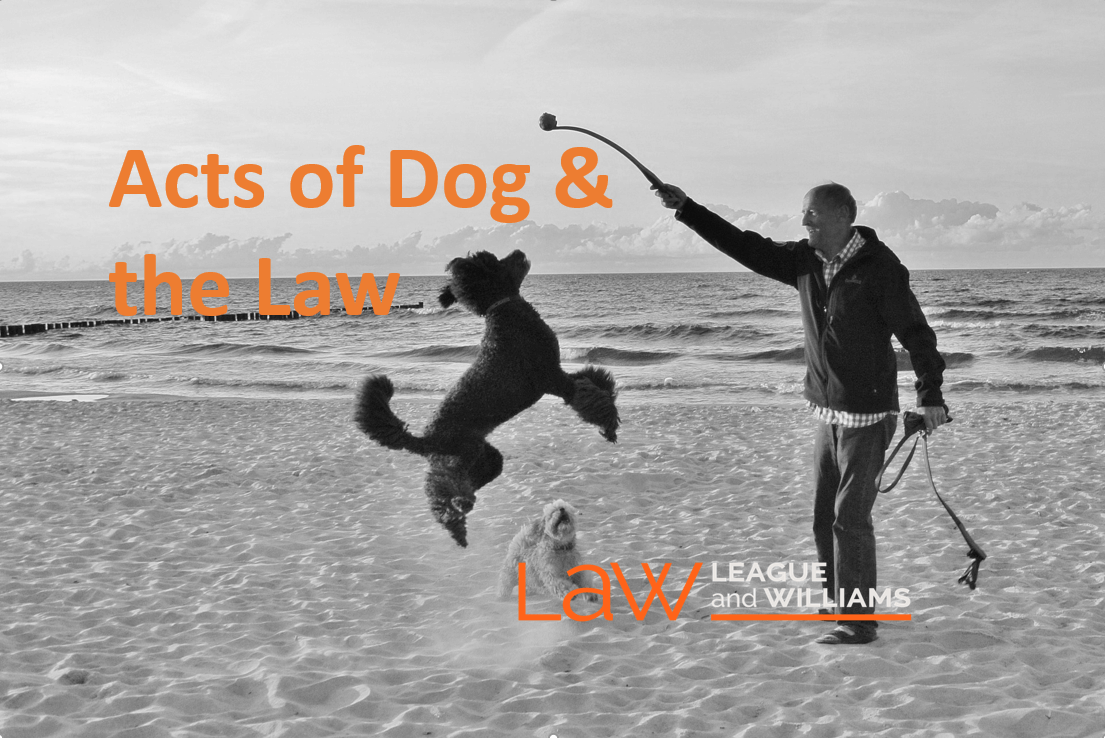 Personal Injury & Property Damage – Who Fetches the Bill for Acts of Dog?

What are the legal and financial consequences when a dog injures somebody or causes property damage?  What can dog owners do to reduce or avoid those consequences?  Those are the questions being answered in this week’s blog on the acts of dog.

It’s important to note that when it comes to legal responsibility for an act of dog or the resulting dog claim, it applies not only to dogs that you own, but also dogs the are under your care or even those dogs that are on your property with your permission.  Dog owners can often be sensitive to the criticism of others, not unlike how some are sensitive to criticisms of their children.  After all, dogs aren’t just man’s best friend – they are often valued as members of our families.

This blog is not about any specific breed of dog, nor is it about how their owners train or care for them.  Any breed of dog can be either completely harmless or dangerous, depending on the circumstances.  This blog discusses how the law can hold a person responsible for injury, damage or death caused by a dog, and why having insurance is critical.

There are three principle ways that the law holds people responsible for harm caused by a dog:

General negligence law requires that if harm to others from the behaviour of the dog is foreseeable, the person whose control the dog is under has a responsibility to prevent the harm.  This is true regardless of the ownership of the dog, or the location of the dog.  For example, if a person takes a friend’s dog to an on-leash park, and lets the dog off the leash, and the dog knocks an elderly person to the ground, breaking their hip, the person borrowing the dog will likely be responsible for the injuries caused.  It wasn’t their dog, it wasn’t their property, but because they had control of the dog at the time, it is their responsibility.

The second way that the law holds people legally responsible for the acts of a dog is when the damage occurs on property controlled by you.  This is because in BC a person who controls property must take reasonable steps to ensure activities conducted on their property do not pose unreasonable risks to others on their property.  For example, a person decides to host a backyard barbecue and invites all of their friends to bring their dogs. It is reasonable to think that some of the dogs won’t get along, but none the less, the person hopes for the best. During the barbecue, a dog fight ensues, and a guest is badly bitten, suffering nerve damage to their dominant hand.  They find themselves unable to work as a result.  Even though it was not the property owner’s dog that did the damage, because of the property owner’s duty to ensure people are reasonably safe in using the property, the property owner may be held responsible for the injuries.

The Law of Scienter

The last legal basis for liability is based on an old legal maxim called scienter – which is latin for, knowledge of poor behaviour.  Scienter means that if the dog has demonstrated a dangerous behaviour previously, and the owner of the dog knew about, the owner may be liable if that behaviour hurts someone.  For example, a dog owner is aware their dog likes to chase motorcycles because they have seen the dog chase motorcycles.   One day the owner forgets to tie the dog up and it chases another motorcycle and the motorcyclist loses control and is badly injured. The dog owner would likely be entirely at fault for the accident and held responsible for the resulting injuries.

How to reduce the risk of acts of dog?

These are all tragic, but entirely realistic scenarios.  Given this, what can a dog owner due to ensure that man’s best friend doesn’t do serious financial damage?  First, dog owners should take care to have their dog under a degree of control that is appropriate for the circumstances.  Second, dog owners should ensure that they are properly insured for the risk that their dog could cause injury or property damage.

Many people don’t know that their homeowner’s insurance policy includes $1 million in liability insurance.  This insurance will cover a person’s costs for a legal defence, as well as any money that is needed to pay for the damages caused by their dog.  This is true even if the accident happens when they and the dog are away from the property, such as at the park.

The same is true of renter’s or tenant’s insurance policies, and such insurance often costs around $35 per month.  In the last 10 years, approximately 25% of all claims made under homeowner’s and renter’s insurance policies were due to a dog causing injury or property damage.  In the last several years, the average value of a dog related insurance claim has been between $35,000 and $50,000.  Obviously, no dog owner would want to be responsible for this type of debt.  So, being covered by this kind insurance is wise, and can be bought separately if needed.

In closing, dog owners, regardless of the breed, should do the responsible thing by ensuring they’ve reduced the risk by exercising reasonable care and control of their dog and by being appropriately covered by insurance.  Rarely does any dog intend to cause any harm, but unfortunately, the intention of a dog matters not when a dog owner is being sued for damages.  I hope you found this blog helpful and thank you for reading.

We hope you have learned something from this week’s video blog.  Please feel free to like us on Facebook, follow us on Twitter, or subscribe to our YouTube channel to receive notice of our future weekly video blogs on the law.  League and Williams serves clients across British Columbia and is headquartered in Victoria, BC.  Our expertise is in injury law, estate disputes and marine law.  If you are injured and would like a free consultation, contact us via phone at 250-888-0002 or via email at info@leaguelaw.com.  We are here to help injured parties get the fair compensation that they are entitled to.