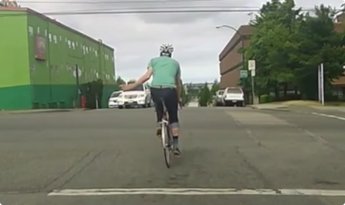 Last week, a local cyclist was ticketed for speeding in a school zone.  The event attracted considerable news attention and a lot of discussion on social media – with many wondering if speeding cyclists are subject to the Motor Vehicle Act.  In this week’s blog, we will discuss how BC’s Motor Vehicle Act applies to bicycles and why this might be.  Viewers should be warned that some of the images in the above vlog may be disturbing to some viewers.

Despite being call the “Motor” Vehicle Act, section 183 of the BC’s Motor Vehicle Act states:

In addition to the duties imposed by this section, a person operating a cycle on a highway has the same rights and duties as a driver of a vehicle.

In other words, all of the rights and duties provided to cars, apply to bicycles as well.  This applies to speed limits, the manner in which bicycles and vehicles enter and leave roadways, and how they negotiate intersections and interact with each other.  In my view, this is a good thing. There is a significant power indifference between motor vehicles and bicycles, and similarly, between bicycles and pedestrians.  Speeding cyclists are a road safety hazard.

It may seem obvious that, because of the simple physics of mass times velocity, a vehicle can cause more damage to a cyclist, than a cyclist to a pedestrian, but that comparison bears little comfort for a pedestrian who suffered a brain injury when they are knocked to the ground by a careless cyclist.  In other words, an object traveling at speed does not need to weigh even a fraction of what a vehicle weighs in order to cause significant injury.  Section 183 provides for pedestrians the same increase in safety from being injured by cyclists, as it provides cyclists from being injured by motorists.

What many people overlook in this debate is that while every person, including a cyclist or pedestrian, injured by a motor vehicle in BC will have some form of insurance coverage to help pay for medical expenses and wage loss while they are injured, the same is sadly not true of pedestrians injured by speeding cyclists.  In other words, ICBC and private automobile insurers will not pay for the medical expenses or wage loss of a pedestrian injured by a cyclist.  It is only if the cyclist has liability insurance through their home or renters insurance that they will have some source of money to help pay for the injured person’s expenses.  If that insurance is not available, the cyclist will be personally responsible to pay for the injured person’s expenses. Often, this can mean personal bankruptcy for the cyclist, as many injuries result in hundreds of thousands of dollars in damages.  Both the injured pedestrian and the cyclist are the ultimate losers in that scenario.

Imagine for a moment a cyclist speeding though a school zone, colliding with a small child who is crossing the road, leaving the child with a brain injury.  The cyclist would likely have no insurance and the child would be left with minimal resources to pay for medical care and income loss through their life.  In short, there is good reason the safety precautions set out in the Motor Vehicle Act apply to bicycles as well as motor vehicles.

Inability to Gauge Speed is No Excuse

In closing, I reviewed one blog in the last few days that questioned whether a cyclist should be ticketed for speeding when bicycles do not have a speedometers and therefore cannot gauge their speed.  This raises an interesting issue that we will cover in more detail in a future blog, but for the time being, it will suffice to say that cyclists should always err on the side of caution if they are unable to reasonably judge their speed.

If you have a question about this issue topic or another legal issues, please feel free to contact us for a free legal consultation.  We may be reached at our offices at 250-888-0002, or via email at info@leaguelaw.com.