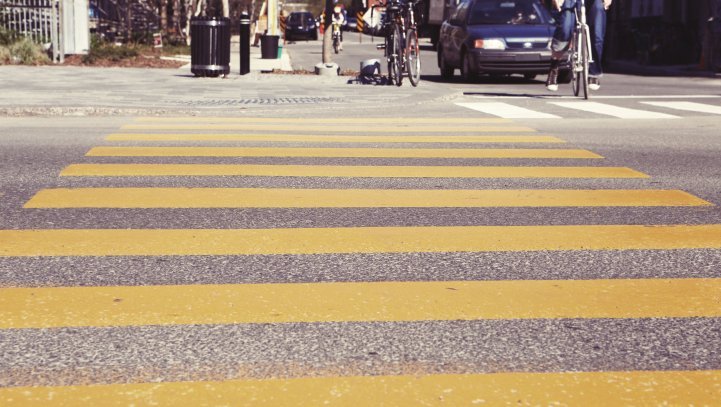 Perhaps one of the most common mistakes drivers make is not understanding what is a crosswalk, and who, pedestrian or vehicle, has the right of way.  Most people think that a crosswalk is only that area on a street marked with parallel white lines.  Unfortunately, those people are incorrect.

The B.C. Motor Vehicle Act defines a crosswalk as either:

One: the portion of the roadway at an intersection or elsewhere distinctly indicated for pedestrian crossing by signs or by lines or other markings on the surface,

Two: the portion of a highway at an intersection that is included within the extension of the lateral lines of the sidewalk, curb or edge of the roadway (whether it is marked or not).

This means a crosswalk is the area within imaginary lines drawn across the street from the edge of the sidewalk, curb or pavement edge, on one side of the street, to the similar edge on the other side of the street.  Put another way, there are really three types of crosswalks.

This begs the question, however, if intersections have unmarked crosswalks, what is an intersection?

Again the B.C. Motor Vehicle Act comes into play.  It defines an intersection (and the words get a bit fancy) as:

“the area within the prolongation of the curbs or boundary lines of two roadways that join one another at or approximately at right angles, “

“if the roadways do not join each other at close to right angles, the area within which vehicles travelling on different highways may come in conflict;”

What this means is that where roadways cross (even at a T-intersection), the crosswalk exists in the area where the direction of each roadway’s edges intersect, whether it is controlled by a stop sign or a stop light, and whether or not there are distinct pedestrian markings.

This definition of crosswalk is important when it comes to who has the right of way.

The B.C. Motor Vehicle Act states the following about the right of way between a vehicle and a pedestrian at a crosswalk:

“the driver of a vehicle must yield the right of way to a pedestrian where traffic control signals are not in place or not in operation, when the pedestrian is crossing the highway in a marked or unmarked crosswalk”

“the pedestrian is on the half of the highway on which the vehicle is travelling,”

“is approaching so closely from the other half of the highway that he or she is in danger.”

That said, the motor vehicle act requires that a pedestrian not leave a curb or other place of safety and walk or run into the path of a vehicle that is so close it is impracticable for the driver to yield the right of way.

What does all this mean? It is simple.

While a pedestrian may not step off a curb at an unmarked crosswalk when it is dangerous to do so, the pedestrian does have the right of way over a vehicle at an unmarked crosswalk when they are crossing from the same side of the road as the passing vehicle, or so closely from the other side of the road that they would be in danger if the vehicle did not stop.  Unfortunately, many pedestrians are injured, or at least very frustrated, because motorists do not understand the rights of pedestrians.

Regardless of what the law says, however, at the end of the day, if we are all courteous and careful, we will all be better off.

We hope you have learned something from this week’s blog.  Please feel free to like us on Facebook, follow us on Twitter and subscribe to our YouTube channel to receive notice of our future weekly video blogs on the law.  League and Williams is a Victoria, BC based law firm with expertise in injury law, estate disputes and marine law and may be reached via email at info@leaguelaw.com or phone at 250-888-0002.  If you are injured and would like a free consult, give us a call for a free consult.  We are here to help injured parties get the fair compensation that they are entitled to.